We’re the only national non-profit organization dedicated to planting and nurturing trees in rural and urban environments.

To date, with our community partners and sponsors, we have planted more than 83 million trees.

Improving the lives of Canadians by planting and nurturing trees while teaching about the value of trees.

To bolster Canada’s urban forests and inspire people to participate in, and advocate for, community greening.

Passionate: We are committed to a greener, greater Canada.
Collaborative: We work hand-in-hand with partners, governments and agencies.
Integrity: We conduct business with the highest level of professional integrity.
Quality: We are committed to delivering quality educational programs and services.
Results-Oriented: We focus on achieving tangible results. Our work with Indigenous communities

Tree Canada believes in honouring the values of the truth and reconciliation commission and have been proud collaborators with First Nation communities and their tree plantings projects since our beginnings in 1992. Together, we build healthier communities and share a love and respect for natural spaces. 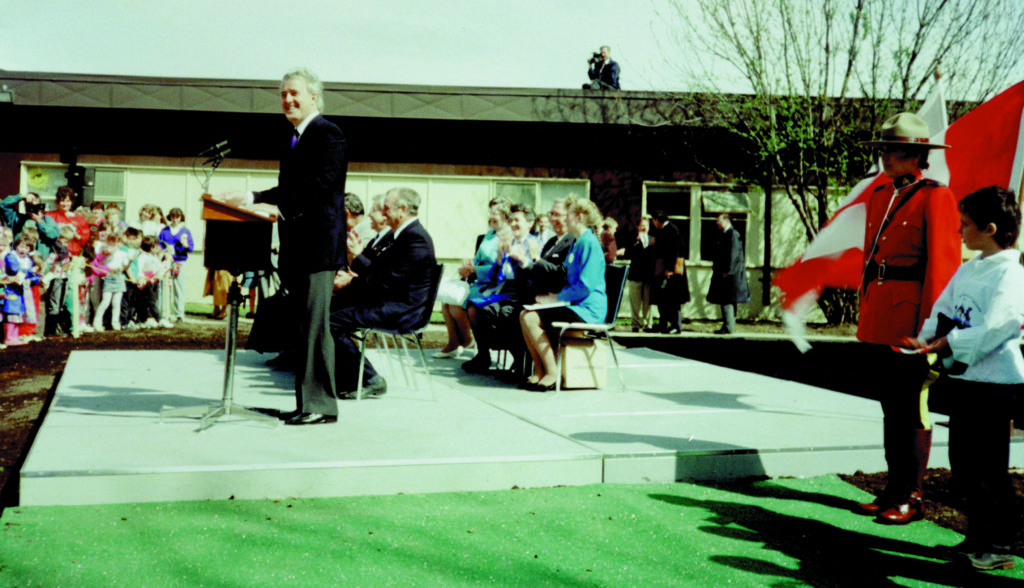 Tree Canada was founded in 1992 as the “National Community Tree Foundation”. Although we are now a privately funded charity, for the first part of our history, we were publically funded by the Canadian Forest Service within Natural Resources Canada.

Tree Canada establishes the Eterne Award to recognize companies with exemplary commitment to planting and nurturing trees. To this day, the Eterne Award remains Tree Canada’s highest honour and is still awarded annually to the most deserving organizations. Tree Canada releases our first publication about the importance of trees in offsetting carbon pollution. 2003 was a devastating year for natural disasters across Canada. Wildfires in B.C., Hurricane Juan in Nova Scotia, outbreaks of Asian Long-horned Beetle and Emerald Ash Borer in Ontario. Tree Canada responded with separate Operation ReLeaf restoration campaigns for communities affected by each of these disasters. The same year, we founded the Canadian Urban Forest Network to help bring together urban forestry professionals and municipal arborists all across Canada. Also in that year, the Monterey Inn of Ottawa became Tree Canada’s first certified carbon-neutral company.

Tree Canada works with leading urban forestry experts in the country to develop and publish the Compendium of Best Management Practices for Canadian Urban Forests.

In 2007 we changed our name to “Tree Canada” when we transitioned from a publically funded organization under the federal government to a privately funded charity.

That same year, Tree Canada released “Places of Green,” a documentary about trees and urban forests, which aired on Global TV and PBS. Tree Canada was also awarded the prestigious Canadian Environment Award for our dedication to environmental stewardship.

In 2008, Tree Canada won the International Society of Aboriculture Award of Excellence and several M.P.s signed on with Tree Canada to operate carbon-neutral campaigns. Tree Canada deploys its expertise internationally for the first time in Armenia under the “Building International Bridges for Forest Futures” program. Also in 2009, Tree Canada finalized a formal Carbon Protocol for our carbon sequestration program. We also launched a new Operation ReLeaf initiative “BC Fire ReLeaf” to help the province recover from devastating fires. Tree Canada was awarded the Canadian Institute of Forestry’s prestigious Group Achievement Award for “outstanding achievement by teams and groups of natural resource managers, researchers and NGO groups in the field of forest resource related activities in Canada.” In 2016, devastating forest fires struck Fort McMurray, Alberta. Within a month of the fires, Tree Canada was onsite working with local foresters, corporate partners and the Regional Municipality to restore this community’s green spaces. By the end of year #1, we had already planted more than 70,000 trees thanks to generous support from corporate sponsors and everyday Canadians making this our largest ever Operation ReLeaf initiative. Tree Canada becomes an official #Canada150 partner with the Department of Canadian Heritage. Working closely with CN, we supported 150 tree plantings in 150 communities in every province and territory in the country to mark the 150th anniversary of Confederation.